On World Food Day, 60% of the population suffers from food insecurity in Syria

On World Food Day, 60% of the population suffers from food insecurity in Syria

The United Nations defined food security in 1974, at the World Food Conference, as “the availability of sufficient food for individuals at all times.” According to its definition, Syria faces a major food insecurity crisis, and a continuous deterioration in the standard of living of most families, especially the displaced in camps in different parts of Syria.

The problem of obtaining food in Syria began with the escalation of displacement campaigns, from which most of the industrial, agricultural, commercial and health sectors suffered as a result of the bombing and destruction that targeted infrastructure and raw materials. The health system collapsed, industry stopped and factories were destroyed, and some lands were burned and their owners were displaced.

The percentage of people suffering from food insecurity in Syria increased by 57%, an increase of 4.5 million people, the unemployment rate increased and the migration rates doubled in search of ways to live, schools stopped and the number of dropouts increased, In addition to the dwindling of livestock due to the lack of space and the frequent displacement and mobility, which increased horribly, the gap between the available and the need. The employment opportunities dwindled, and the youth and many families were helpless in the face of the daily requirements of life to survive.

The economic conditions continued to deteriorate and worsened, the currency depreciated 70 times, and prices rose. Mass displacements coupled with unsuitable sites for the displaced people and harsh living conditions, especially during the winter season, constituted a major concern for the displaced. According to recent statistics, nearly 1.7 million people have been living in 1,401 IDP sites in northwest Syria for more than ten years.

Ataa Association for Humanitarian Relief was among the first to respond. It carried out many relief and development projects and programs, supported four thousand breeders to enhance livestock, provided more than 500 tons of fed and 120,000 veterinary services, and distributed more than 2.4 million food baskets, and more than 14 million loaves of bread, in addition to supporting the cultivation of five hundred hectares annually for more than 15 thousand beneficiaries.

The programs and projects implemented by humanitarian organizations collectively contributed to preventing the situation from collapsing and alleviating the suffering, but they were unable to bridge the gap. Families in the north lost their land and homes, farmers sold livestock because they lost their land, and they left their factories and professions after losing capital. Humanitarian aid became the only source of income for most families.

The Russian war on Ukraine has affected global food security, especially Syria. The World Food Program has announced a reduction in the quantities of food provided through humanitarian aid packages for the displaced in northwestern Syria, starting next October, with an estimated reduction of 309 calories from food, This is the third reduction of its kind, in a way that is not commensurate with the needs of most displaced families, especially with the presence of cholera and the risk of its spread.

It is expected, according to humanitarian workers, that if the UN Security Council resolution is not renewed after July 2022, the humanitarian situation will worsen in northwestern Syria, which will exacerbate the current urgent needs after cutting off the main channel for transporting humanitarian aid to the region, and stopping support for 2, 6 million needy people (520,000 families), leaving a gap of 81% of the total needy people who are food insecure in northwest Syria.

Ataa Association for Humanitarian Relief seeks with its partners to enhance food security through early recovery programs and sustainable development projects, to build family resilience, by facilitating regular food access to those in need, and enhancing their ability to obtain a stable source of income by supporting agricultural and animal production projects and sustainable livelihoods, in addition to raise the nutritional level and prevent malnutrition for children aged 6 to 23 months, by providing specialized nutritious foods. 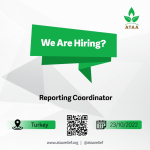