Merciful Souls, in partnership with Ataa Association, conclude the 38th “Ambassadors of Goodness” campaign with many achievements

Merciful Souls, in partnership with Ataa Association, conclude the 38th “Ambassadors of Goodness” campaign with many achievements

The Merciful Souls Association, in partnership with Ataa Association for Humanitarian Relief, concluded the 38th campaign of the “Ambassadors of Goodness” team, after it lasted for four consecutive days in the states of Urfa and Mardin in Turkey.

The campaign targeted more than five thousand Syrian refugees in Turkey, distributed according to the various campaign programmes. Where food baskets and blankets were distributed to 100 families of the most vulnerable families, in addition to the distribution of food shopping coupons to 300 families of orphans, injured and needy families. A “tuk-tuk” vehicle was also presented to a refugee family as part of the livelihood projects of the Ataa Association.

The campaign programs also included providing winter clothes to 150 children, then they were taken to a playroom to spend an enjoyable time during which they had lunch. In addition to holding a party and a psychological support program with the participation of 250 children, including orphans, which covered several activities, including the distribution of gifts to them.

The “Ambassadors of Goodness” team also visited 30 families of Syrian refugees residing in Turkey, and financial assistance was provided to them, in addition to household and electrical appliances that meet their various needs, such as refrigerators, washing machines, and cooking ovens. This contributes to alleviating part of their burdens, sharing their responsibility in providing basic necessities, and ensuring a better life for their families and children.

It is noteworthy that the Ataa Association for Humanitarian Relief has implemented many campaigns in Turkey, in partnership with local and international teams and organizations, targeting Syrian refugees, including women, children and men. In addition to the many existing and ongoing programs and projects, which provide free services in different regions in Turkey and in different regions along northern Syria, with the aim of standing by our people and helping them. 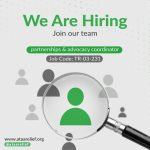