“Ataa Humanitarian Relief Association” announced that it was running a convoy consisting of 28 trucks of relief and humanitarian aid, as part of the “Warmth of the Merciful Hearts 3” campaign provided by the “Merciful Souls Association”,  people of 1948 and cities of the Palestinian interior, which set off from Hatay state, southern Turkey, to Bab Al-Hawa crossing border , in preparation for its entry into Syria, in support of the displaced and needy people in the camps of northern Syria.

In a speech delivered by Mr. Khaled Al-Issa, Director of Ataa Association for Humanitarian Relief, on the occasion of the launch of the “Warmth of the Merciful Hearts 3” convoy, in which he thanked the Merciful Souls Association for the various relief and humanitarian services it provided to the displaced people in northern Syria.

He said that the people of merciful hearts from the villages and cities of Palestine 1948 have a strong relationship with orphans, widows, bereaved and needy people , as they have been offered goodness and giving for many years. Indeed, the tongue and the heart dont know how to thank them.

Mr. Al-Issa confirmed that our people in Palestine 1948, since the first day, have felt the plight of their Syrian brothers, and they did not fail one day to give a hand, and we are on the verge of the arrival of severe waves of harsh cold in the winter season, indicating that this caravan “the warmth of merciful hearts 3” comes to bring warmth to tents for displaced people in northern Syria

He added that the Merciful Souls Association is keen and honest to deliver donations provided from our people, villages and cities of Palestine 1948, as they communicate with us on a daily basis dozens of times in order to meet the most important daily needs of the affected displaced people .

Mr. Al-Issa pointed out that the spread of the Corona virus pandemic and the conditions of closure of airports prevented the delegation of Merciful Souls from being among us today, but this closure did not prevent them from providing aid and delivering aid to the deserved of the displaced, as he stressed that the relief aid convoy provided from 65 villages and cities in Palestine 1948 will start from Hatay Province to reach the border crossing, then to the Syrian interior until it finds itself in the hands of the beneficiary in his tent.

Mr. Al-Issa noted that the people will never forget the great honorable humanitarian attitudes and the generous relief aid that the Palestinian people have provided to the displaced and afflicted Syrians, as there is no place in the world that need help without fulfilling the duty of the humanitarian call. Glory be to Allah, they like their name ( Merciful Souls ) , they chose their name to be real merciful to orphans, widows, the elderly, bereaved and the poor..

Mr. Al-Issa expressed his thanks to the Merciful Souls Association and the Palestinian people for standing with the oppressed and the needy, so you have all our appreciation and love for your support and efforts that you have made to stand by the displaced Syrians in northern Syria and southern Turkey in this ordeal by providing multiple relief assistance.

The Head of the Merciful Souls Association, Mr. Raed Badr, said that the aim of launching the “Merciful Hearts Duff” is to contribute to providing the basic and necessary needs in order to alleviate the suffering of the needy. Surely, all of us know what children, women and the elderly suffer from cold, hunger and fear. We also aim, through this aid, to come closer to God in our help to our refugee and displaced brothers on the basis of (God is with the help of the man as long as the man is at the aid of his brother ).

Mr. “Raed Badr” added that the relief campaign comes within the framework of the continuous Palestinian support for the displaced Syrians by providing the humanitarian needs and the necessary means of heating for the affected families , in order to alleviate the suffering of these displaced persons who have been suffering from severe and tragic conditions since the beginning of the Syrian crisis. There are few entities who give hand to them in the midst of severe frost waves that sweeping their areas.

He stressed that providing aid to the displaced Syrians with the enthusiasm of our good and blessed people in (interior Palestine,  Alnassira) is a legitimate duty and a humanitarian imposition for everyone affected by the catastrophe, injustice and displacement. And if it takes so long time, we have pledged to go as much as we can to provide relief and humanitarian aid to our displaced people in the north Syria and southern Turkey

Mr. Al-Badr explained that the “Warmth of the Merciful Hearts” convoy contains the following relief materials: 100 fully equipped tents, 5,000 tons of pyrin used for heating, 1,500 winter clothes, 2,000 food baskets, 4,500 blankets, in addition to 1,000 stoves, which are scheduled to be distributed according to a geographical map in the camps inside Syria near the Turkish border, in coordination with the executing authorities

Mr. Al-Badr affirmed that the Merciful Souls Association continues to launch humanitarian campaigns and convoys in support of Syrian refugees and displaced persons, in cooperation with Ataa Association, which has reached so far three convoys since the beginning of the winter season and there will be a fourth convoy that will be launched next February. Stressing that these efforts Relief comes as an embodiment of the humanitarian role of the Palestinian people in alleviating the suffering of our affected people, adding that the association will continue to provide relief projects until God permits a relief  and every displaced return to his country and home, expressing his deep thanks to the efforts of Ataa Organization and the Turkish authorities to facilitate procedures for supporting refugees and displaced persons Since the first day of the Syrian crisis

Mr. Al-Badr pointed out that the Merciful Souls Association, since the beginning of the Syrian crisis, focused on relief projects such as the distribution of food baskets, tents, medical support, the project of ” Akika” and vows, and the distribution of meat, and with the continued suffering of the Syrians, the association was keen to sponsor orphans and support the educational sector by establishing classroom caravans to teach students deprived of the right to education In the informal camps north of Syria .

Since its establishment, Ataa Association has been working to implement its relief projects by providing the most beneficial and best for the displaced and refugees, through periodic relief plans that interact with the priorities and needs of the afflicted people at every stage to confront them and deal with them from various aspects such as food, health and accommodation, in addition to working to move from urgent relief to development as a goal it seeks to achieve  within refugee communities and displacement areas 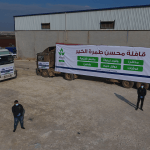