“Furssan Al-Bayan” competition in writing short stories and the art of poetic recitation was concluded its activities in Istanbul through holding a ceremony through Zoom and Facebook applications on Saturday January 16th, with the participation of literary and artistic celebrities . It has been announced the names of the first winners of the competition, which was launched by several Arab and Turkish bodies.

The celebration , which hosted the poets Mustafa Ekrima and Hudhaifa Al-Arji, and the artists Yahya Hawwa and Abdel Fattah Owenat, and was run by Israa Al-Sheikh ( media ). The beginning of its speeches was with the general coordinator of the competition “Samir Attia”, director of the Palestine House of Poetry and Culture of Return, in his speech during the ceremony on the need to support the young generation. Focusing on creative people because they are the hope for a bright future, and he stressed that such qualitative work that is added to other qualitative efforts will raise the edifice of the language and shine our boys and girls, which will leave a great impact and interaction in order to proceed to the end of this stage, provided that we continue for many stages in building this Great edifice of knowledge .

In turn, the organizers of Furssan Al-Bayan considered in their speech that these competitions aim to attract male and female students to explore themselves and their abilities in the Arabic language to promote individual and collective cultural work. While Mr. Abdul Rahman Al-Shardoub, Deputy Director General of Ataa Association, stressed the need for partnerships that promote work and the importance of the competition in exploring and developing capabilities and skills.

As for Mr. Yasser Wafai, General Director of ” Massarrat Association ” he valued these societal efforts among institutions and individuals that stimulate interest in the proper cognitive formation of boys and girls on the path to serious culture

le the organizing committee of the event stated that the number of participants in the competition who reached the final qualifiers of males and females amounted to 150 participants, in addition to wide Turkish participation and Arab and Muslim nationalities residing in 12 Turkish states, noting that many real challenges the committee faced due to the Corona pandemic and the absence of the students out of schools and the ability of male and female teachers to communicate directly with them, follow them up, and motivate them to participate in the competition.

As for Mr. Ayman El-Gabaly, the head of the jury, he considered the competition, despite the varying levels, of a great deal of quality, promising a generation that carries awareness and insists on excellence and creativity. He added that they were better than we expected, and were close to each other at a fair rate among the participants and their level variation, but they walk the path with confidence and ability and try to advance their experiences according to the literary and poetic data in front of them, whether old or recent, and I think they are walking in the right path that will inevitably rise in the poetic and literary level they have even after a while, adding that we have talents of real boys and girls that promise a distinct poetic and literary generation.

” Furssan Al-Bayan ” Competition, which lasted from October 2020 to January 2021, is the first competition of its kind launched for Arabic speakers in the Turkish Republic, and aims to launch special platforms for creative boys and girls, discover promising talents and advance them. In addition to the interest in and development of literary pens, the competition administration identified four topics for the competition: “the refuge , the homeland, the Arabic language, and Turkey”. 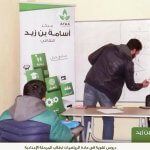