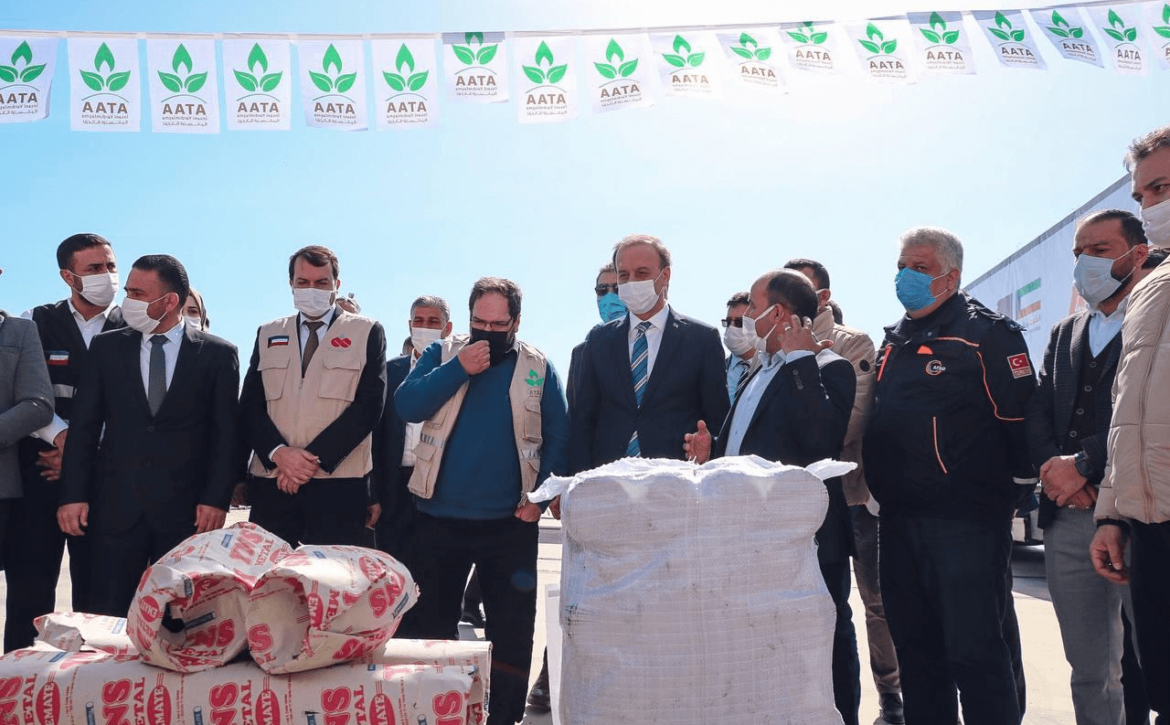 International Mercy Association, in cooperation with Ataa Association for Humanitarian Relief, in the presence of Mr. “Abdullah Arin”, Governor of Urfa, launched urgent relief aid convoys to the displaced Syrians, on the occasion of the national holidays in the State of Kuwait. The fifth convoy, consisting of 28 trucks loaded with winter and food relief aid, set off from the city of Urfa in southern Turkey to the city of Tal Abyad and the surrounding villages in northeastern Syria, as part of the Mercy International Convoy  432 presented by “Ahl – Alkheir Benefactors of the State of Kuwait” to be the number of convoys provided to the displaced north Syria, since the beginning of winter, 100 relief trucks.

The coordinator of the winter campaign at Ataa Association, Mr. Osama Aba Zaid, said that the aim of launching International Mercy Convoy 432 is to contribute to providing the basic and essential needs of the displaced Syrians in the areas of Tal Abyad, and to alleviate their suffering, especially in the harsh winter that swept their areas.

Mr. Aba Zaid explained that about a thousand persons will benefit from the convoy, which included a set of winter aid and the necessary needs of displaced families who suffer tragic conditions during the winter season, with its cold winds and torrential rains sweeping through and flooding the camps.

According to Mr. Aba Zaid, the convoy contains the following relief items: 200 tons of flour, 2000 blankets, in addition to 200 tons of coal used for heating , 2500 food baskets, 2500 hygiene kits. And it is scheduled to be distributed according to the needs assessment in multiple areas in Tal Abyad region.

In a speech delivered by Mr. Khaled Al-Issa, Director of Ataa Association for Humanitarian Relief, he thanked the International Mercy Association and the Kuwaiti people for standing with their Syrian brothers throughout the Syrian crisis during the ten years, as the State of Kuwait had a fundamental role in providing continuous support at all levels in the fields of humanitarian work.

He also renewed his gratitude to the State of Kuwait as an Emir, government and people. Blessing them in his name and in the name of the Syrian people and the associations operating in Turkey and northern Syria on national holidays, wishing Kuwait permanent security and stability

Khaled Al-Issa renewed his sincere thanks to the Turkish government, leadership and people, and to the state of Urfa represented by Mr. Abdullah Arin, the governor of Urfa

For his part, Mr. “Jamal Akanji”, the representative of the International Mercy in Turkey, in a speech he delivered on the occasion of the launch of the Convoy of Mercy “432”, thanked the Turkish government and Ataa Association for their contribution to launching relief aid convoys, stressing that this convoy is the fifth of the International Mercy Association during the current winter season.

Mr. Akanji praised the state of Kuwait standing by their Syrian brothers in their ordeal.

He added that the campaign comes within the framework of the continuous Kuwaiti support for the displaced Syrians by providing the necessary humanitarian needs and means of heating to the affected families in order to alleviate the suffering of these displaced persons who have been suffering from severe and tragic conditions since the beginning of the Syrian crisis, in the midst of severe frosts sweeping their areas.

tressing that these relief efforts are an embodiment of the humanitarian role of Kuwait and its people in alleviating the suffering of our affected people, expressing his deep thanks to the efforts of the Kuwaiti Ministry of Foreign Affairs for relief organizations and Turkish entities to facilitate the procedures of efforts to support refugees and displaced persons since the first day of the crisis.

In his turn, Mr. “Abdullah Arin”, Wali of the city of Shanlıurfa, in his speech during the launch of the convoy, affirmed his thanks to the State of Kuwait, which stood and is still standing with the oppressed, as it gave hand of aid to them, and provided assistances continuously in various humanitarian sectors.

At the end of his speech, Mr. Arin referred to the great support that Kuwaiti organizations give to the Syrians in the state. Also, he affirmed  the depth of the relationship and friendship between Turkey and the State of Kuwait and the urgent need for continued support for the Syrian displaced and refugees.

Mr. Arin renewed his thanks to the International Mercy Association and the State of Kuwait represented by its Emir, government and people, wishing them happy holidays

Ataa Association, since its establishment in 2013 AD, has been working to implement its relief projects for the displaced and refugees, through periodic relief plans that interact with the priorities and needs of the afflicted people at every stage to confront and deal with them from various nutritional, health and shelter aspects, in addition to working on the transition from urgent relief to development as a goal that the association seeks to be achieved within refugee communities and areas of displacement.

Ataa Association continue to work on the "Social Supervision" Project