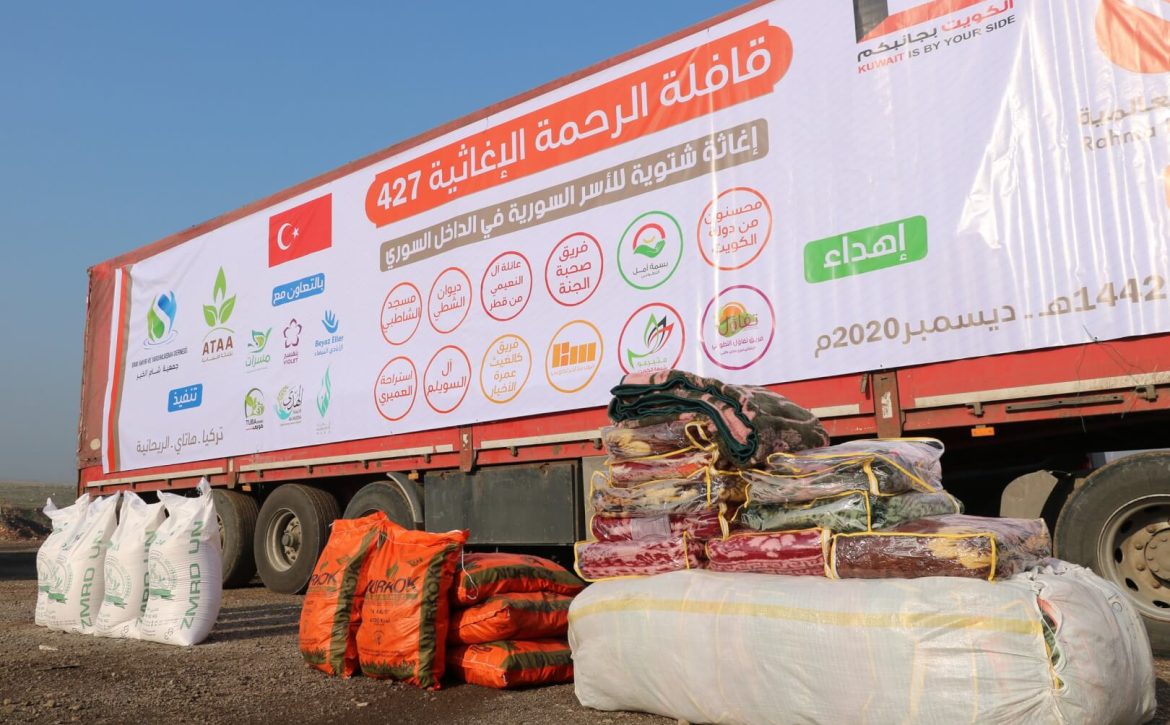 Ataa Association, in cooperation with a number of humanitarian organizations, announced yesterday that it will conduct a convoy consisting of 20 trucks of relief and humanitarian aid, within the relief convoy No. 427 provided by Al Rahmeh Al Aalamieh Association and the Kuwaiti people, which set off from the city of Rehaniyeh –  Hatay, south of  Turkey, in support of the displaced Syrians in the villages and towns of northern Syria.

The director of Ataa’s office in Hatay state, Mr. Abdulaziz Al-Tahan said that the aim of launching the Al Rahmeh Al Aalamieh Convoy is to contribute to securing the basic and essential needs of the displaced Syrians in the camps.

Mr. Al-Tahan explained that about 80,000 people will benefit from the convoy, which included a set of winter aid and the necessary needs of displaced families who suffer from extremely tragic conditions during the winter season with its cold winds and torrential rains that sweeping the camps and flood them.

Mr. Al-Tahan expressed his thanks to Al Rahmeh Al Aalamieh Association , the Kuwaiti people and the Turkish authorities for their support and efforts that they made to support the displaced Syrians in northern Syria and southern Turkey in this ordeal by providing various relief assistance.

The head of the Syria and Turkey office in Al Rahmeh Al Aalamieh Association, Mr. Walid Al-Suwailem said that the relief campaign comes within the framework of the continuous Kuwaiti support for the displaced Syrians by providing humanitarian needs and the necessary heating means for the affected families in order to alleviate the suffering of these displaced people who have been suffering from severe tragic conditions since the beginning of the Syrian crisis, amid severe freezing waves that sweep their regions.

Mr. Al-Suwailem explained that the convoy contains the following relief items: 200 tons of flour and 4000 blankets, in addition to 200 tons of coal used for heating, in addition to many food parcels, which are scheduled to be distributed according to a geographical map inside Syria in coordination with the implementing authorities .

Mr. Al-Suwailem stressed the continuation of Al Rahmeh Al Aalamieh in launching humanitarian campaigns and convoys in support of Syrian refugees and displaced in cooperation with Ataa Association and other humanitarian organizations, which have reached 427 convoys  so far since the beginning of the Syrian crisis. Stressing that these relief efforts are an embodiment of the humanitarian role of Kuwait and its people in alleviating the suffering of our affected people. He expressed his deep thanks to the efforts of the Kuwaiti Ministry of Foreign Affairs, relief organizations and Turkish entities to facilitate procedures for efforts to support refugees and displaced persons since the first day of the crisis.

Since its establishment in 2013, Ataa Association has been working to implement its relief projects by providing the most useful for the displaced and refugees, through periodic relief plans that interact with the priorities and needs of the afflicted at every stage to confront them and deal with them from various aspects of food, health and accommodation, in addition to working to move from urgent relief to Development as a goal the association seeks to achieve within refugee communities and areas of displacement. 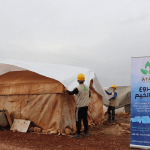